Why Do We Buy Into The ‘Cult’ Of Overwork?

Overwork culture is thriving; we think of long hours and constant exhaustion as a marker of success. Given what we know about burnout, why do we do give in?I

In 1987 Gordon Gekko, the unscrupulous cigar-smoking powerhouse in the film Wall Street, told the world: greed is good. The movie – ultimately a cautionary tale – depicted work and wealth-obsessed executives putting in long hours in sleek skyscrapers to seal deals and boost their pay packets, at the expense of whoever got in their way. If you live and breathe work (and toss in some moral flexibility), the message was, the rewards will be exciting – and immense.

Although many of us associate overly ambitious workaholism with the 1980s and the finance industry, the tendency to devote ourselves to work and glamourise long-hours culture remains as pervasive as ever. In fact, it is expanding into more sectors and professions, in slightly different packaging.

New studies show that workers around the world are putting in an average of 9.2 hours of unpaid overtime per week – up from 7.3 hours just a year ago. Co-working spaces are filled with posters urging us to “rise and grind” or “hustle harder”. Billionaire tech entrepreneurs advocate sacrificing sleep so that people can “change the world”. And since the pandemic hit, our work weeks have gotten longer; we send emails and Slack messages at midnight as boundaries between our personal and professional lives dissolve.

In spirit, we’re not so far from the Gekko years as we think. Yet, one thing is different: we understand far more about the consequences of overwork, and the toll burnout can take on our mental and physical health. Given how entrenched our admiration for high-stress work culture is, however, halting our overwork obsession will require cultural change. Could the post-pandemic world be our chance to try?

Where it happens and why

Overwork isn’t a phenomenon exclusive to Silicon Valley or Wall Street. People work long hours all over the world, for many different reasons.

In Japan, a culture of overwork can be traced back to the 1950s, when the government pushed hard for the country to be rebuilt quickly after World War Two. In Arab League countries, burnout is high among medical professionals, possibly because its 22 members are developing nations with overburdened healthcare systems, studies suggest.

Reasons for overwork also depend on industry. Some of the earliest researchers on burnout in the 1970s asserted that many people in jobs geared toward helping others, like employees in clinics or crisis-intervention centres, tended to work long hours that led to emotional and physical exhaustion – a trend that’s shown up in the pandemic, too.

But millions of us overwork because somehow we think it’s exciting – a status symbol that puts us on the path to success, whether we define that by wealth or an Instagram post that makes it seem like we’re living a dream life with a dream job. Romanticisation of work seems to be an especially common practise among “knowledge workers” in the middle and upper classes. In 2014, the New Yorker called this devotion to overwork “a cult”. 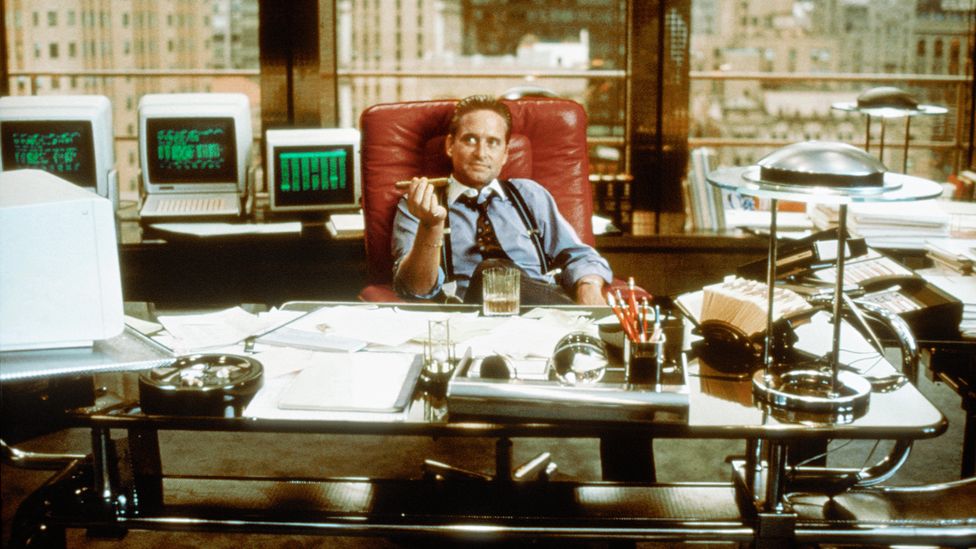 “Money never sleeps” was one of the messages from 1987’s Wall Street, and many think that workaholic vibe coloured the 1980s as a decade and is still common today (Credit: Alamy)

So, where did our tendency to glamourise overwork come from? Why, in rich, Western countries, like the UK and the US, is there a sense that working yourself ragged is something to brag about?

The roots of this phenomenon can be traced back to the ‘Protestant work ethic’ in the 16th Century – a worldview held by white Protestants in Europe that made hard work and the quest for profit seem virtuous. Sally Maitlis, professor of organisational behaviour and leadership at the University of Oxford, says that “later, the drive for efficiency that arose out of the Industrial Revolution”, as well as the way we prize productivity, have “further embedded the value of consistent hard work, often at the cost of personal wellbeing”.

Fast forward to the yuppie age of Thatcher and Reagan, when spending long hours at the office to support the upwardly mobile lifestyle and the rampant consumerism of the decade became more commonplace. Afterward, in the late 1990s and into the early 2000s, workaholics started to be identified not by blazers but rather hoodies, as tech start-ups grew into giants like Google and Facebook, and power shifted to Silicon Valley.

Society started to glorify the entrepreneurs who said they wanted to change the world, and told us how they structured their (very long) days for maximum greatness. Maitlis highlights a motivational shift between the Gordon Gekkos and the Mark Zuckerbergs of the world; the latter felt they were fueled by “passion for the product or service, or for a higher purpose”. (The joke was on us, though, because much of that new technology ended up enabling the kind of overwork and burnout we’re dealing with today.)

These days, many people work long hours to pay off debt, to simply keep their jobs or to make that crucial next step up the ladder (and in many cases, companies expect employees to work long hours and be constantly available). But for those who embrace the overwork culture, there’s also a performative element, whether that manifests as a new car to show off, a ‘dream career’ doing something meaningful or even exhaustion that can be displayed like a bizarre kind of trophy.

We dehumanised the workplace a long time ago – Anat Lechner

Centuries ago, “guys had duels and they’d have a dueling scar, which is almost a kind of badge of honour. You fought and you survived”, says Christina Maslach, professor emerita of psychology at the University of California, Berkeley. “That’s where you brag about, ‘Yeah, I don’t sleep’. It’s that kind of thing.”

In parallel with this work-worship, however, came an unpleasant consequence – burnout. “Burnout has cycles – like it gets rediscovered, then it dies down, and gets rediscovered again,” says Maslach, who has studied burnout since the 1970s.

At that time, occupational burnout was being studied in volunteers at drug-rehab clinics and other workers in the human services industry, many of whom were on call throughout the night, and reported headaches, depression and irritability on the job. A decade later, when the economy was going great guns in places like the US and UK, capitalism-fixation skyrocketed and people worked long and hard. But while the overwork was revered, the burnout that followed hasn’t been.

The World Health Organization defines burnout as a syndrome “resulting from chronic workplace stress that has not been successfully managed”, characterised by feelings of exhaustion, negative feelings about a job and reduced professional efficacy. In other words, it leaves you feeling dehumanised, physically and emotionally exhausted, and questioning why you took the job in the first place. The body formally recognised burnout as an ‘occupational phenomenon’ in 2019.

“Today, it’s all hell broke loose,” says Lechner. A few decades ago, “the pervasiveness of this was nothing like what you see today”. While a lot of burnout “culture came from Wall Street”, she says, it’s even worse now, because we put tech entrepreneurs who barely sleep on a pedestal. (Tesla and SpaceX CEO Elon Musk tweeted in 2018 that when it came to his companies, “there are way easier places to work, but nobody ever changed the world on 40 hours a week”.) 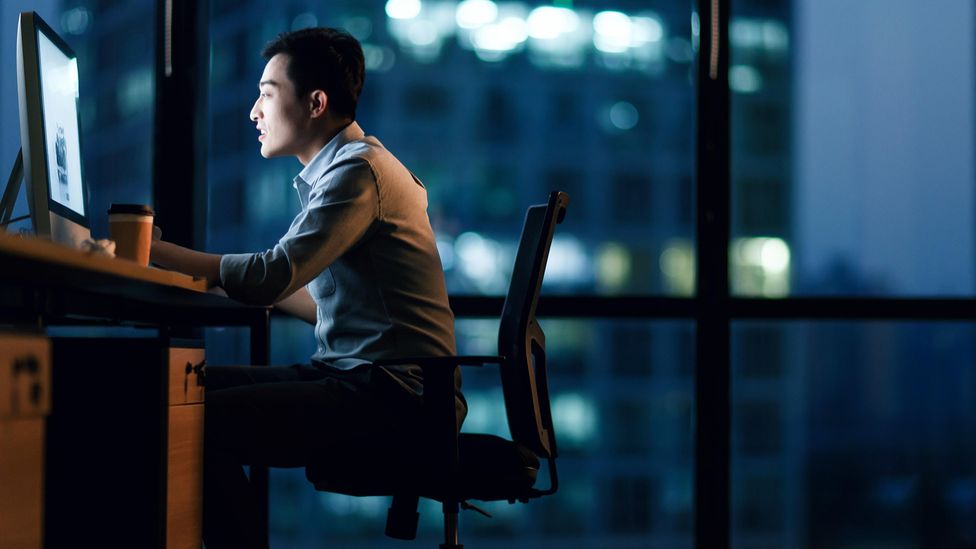 Glamourising overwork has existed for decades, whether it’s been about glorifying prestigious jobs in fancy offices or hustling and grinding to pursue a passion (Credit: Alamy)

Yet even though we’re working harder than ever, and young workers are faced with a potentially toxic combination of greater financial pressures (student debt, combined with lower salaries and higher house prices), pressure to find ‘their passion’ and pressure to find a stable job in an increasingly insecure job market, there may be some small signs of change.

In March, a mock employee survey by 13 first-year analysts at Goldman Sachs found its way into the public eye. Respondents said they averaged 95-hour workweeks and slept five hours a night. “This is beyond the level of ‘hard-working’, this is inhumane/abuse,” said one respondent to the survey, which the BBC has seen. Elsewhere, on TikTok, Gen Z users have been open about mental health struggles, and built communities discussing depression, panic attacks and burnout openly.

And as grueling as the pandemic has been, it’s also forced us to see work-life balance in a whole new way. Last month, LinkedIn conducted a survey of more than 5,000 users over two weeks: 50% and 45% of respondents say that hours or location flexibility and work-life balance respectively have become more important to them since the pandemic.

Workplaces can be very unhealthy environments – if there was any time to change the way we work, now is the time to do it – Christina Maslach

“The pandemic has been powerful not only in making salient many of the things that matter most – health, family, relationships – and in disrupting some of the routines and systems that were keeping people on the treadmill,” says Maitlis.

In response, some companies have begun talking about offering more robust mental-health programmes for workers, including perks like complimentary therapy sessions or free access to wellness apps.Yet, experts think it is highly unlikely that we’re entering a new era that prioritises wellbeing over overwork.

For example, while technology has made it possible for us to work from home indefinitely, it also ties us to work all day long. If there’s a group call where workers dial in from London, Tokyo, New York and Dubai, some people will have to wake up at 0200 to dial in. If they don’t, the company will find someone who will – because as long as we glamourise money, status and achievement, there will always be people who work hard to get them.

And at the end of the day, companies want to make money. “We dehumanised the workplace a long time ago, and I’m not saying it with any pride,” says Lechner. For many companies, it’s still: “If you don’t work, then someone else will come along and do it. And if that’s not gonna help, we’ll allocate it to the AI. And if the AI takes over, we’ll put together a gig workforce.” Overwork, or get left behind.

That’s why she does not believe burnout will be solved anytime in the near future. “It’s not necessarily a message people like to hear. They think they enter a relationship with an employer where the relationship says, ‘I work hard, you take care of me’. Again, this is a 20th Century mindset.”

“Workplaces can be very unhealthy environments – if there was any time to change the way we work, now is the time to do it,” says Maslach. “If you take a plant and put it in a pot and don’t water it and give it lousy soil and not enough sun, I don’t care how gorgeous the plant was to begin with – it isn’t going to thrive.”

ESG 2.0 | The Roadmap to a global changeover

October 14, 2021
In the alphabet soup of financial acronyms, there are three letters that have risen from relative obscurity to prevailin... More

October 11, 2021
Transparency and sustainability consist of two of the largest topics within the global fashion industry today. Many bran... More

200 Years Of Greece, Our Greece! : By Kostas Varsamis

A Historical Survey of the Relations between the United States and Greece and their Future : By George C. Economou

August 11, 2021
During the Second World War Greece was attached in October 1940 by Italy. Mussolini, the then Dictator of Italy, wanted ... More

Greece – US | The interconnected investment dynamics : By Nikolaos Bakatselos

August 10, 2021
Greece and the US have enjoyed excellent diplomatic and trade relations which are today at the highest level ever and ar... More

Five Lessons to learn on Hydrogen as Ship Fuel: By Nathaniel Frithiof