The Hidden Load: How ‘Thinking Of Everything’ Holds Mums Back

When it comes to household responsibilities, women perform far more cognitive and emotional labour than men. Why is this, and is there anything we can do about it?

rganising a playdate, or booking the kids’ medical check-ups. Working out how to hide vegetables in their evening meals, or ensuring there’s enough on the shopping list. Worrying about whether your son is on track at school, your daughter needs new shoes and when to replace your washing machine. On their own, these may all seem like small tasks – but they mount up. And if you ask heterosexual couples with children which partner is most likely to handle them, it is probable that most would offer up the same answer: the mother.

Numerous studies show that women in heterosexual relationships still do the bulk of housework and childcare. Many couples aim to split their responsibilities 50:50, yet for various structural and socio-economic reasons, end up allocating tasks along typically gendered lines. Even in couples who think that they have achieved an equal division of labour, the more hidden forms of care generally end up falling to the woman.

In fact, an increasing body of research indicates that, for household responsibilities, women perform far more cognitive and emotional labour than men. Understanding why could help explain why gender equality has not only stalled, but is going backwards, despite being more discussed than ever. And a broader understanding of this behind-the-scenes labour could help couples redistribute the work more equally – something that, while initially difficult, could play a significant role in helping mothers lighten their load.

Experts say that this hidden work comes in three overlapping categories. There’s cognitive labour – which is thinking about all the practical elements of household responsibilities, including organising playdates, shopping and planning activities. Then there’s emotional labour, which is maintaining the family’s emotions; calming things down if the kids are acting up or worrying about how they are managing at school. Third, the mental load is the intersection of the two: preparing, organising and anticipating everything, emotional and practical, that needs to get done to make life flow. 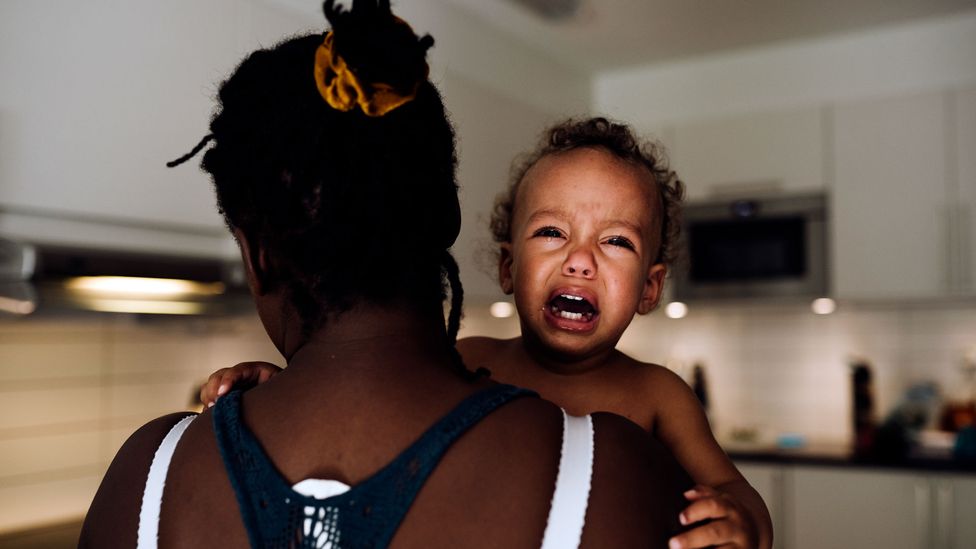 Research shows much of a household’s emotional labour, such as calming distressed children, is part of the load that generally falls on mothers (Credit: Getty Images)

This hidden work is hard to measure, because it’s invisible and performed internally, making it difficult to know where it starts and ends. In 2019 Allison Daminger, a doctoral candidate in sociology and social policy at Harvard University, found that while most participants in her study on cognitive household labour realised that women were doing the lion’s share, this wasn’t yet a “normalised form of work”. In the study of 35 couples, she found that men referred to their wives using terms such as “project manager”, or said they were “keeping track of more”.

In fact, Daminger identified four clear stages of mental work related to household responsibilities: anticipating needs, identifying options, deciding among the options and then monitoring the results. Mothers did more in all four stages, her research showed; while parents often made decisions together, mothers did more of the anticipation, planning and research. In other words, fathers were informed when it came to decisions, but mothers put in the legwork around them.

This hidden work has various impacts; we know, for instance, that women are more likely than men to worry about childcare even when they are not with their children. It also causes additional stress, because it is always present – even when you should be concentrating on other things.

“The mental load is that thread that brings the family into your work life,” says Leah Ruppanner, an associate professor of sociology at the University of Melbourne and author of Motherlands. It’s the constant low-level worry about whether we’re doing enough and the impact our parenting will have on our child’s future. “You’re always trying to mitigate future risk.”

One thing that puzzled Daminger was that this uneven allocation of mental labour did not seem to create much conflict among her participants. To understand why, she conducted a follow-up study a year later that showed couples explained away some of these gendered behaviours. Both men and women suggested that the unequal division of mental labour was because one partner worked longer hours, or stated that women were “temperamentally interested in being organised” – that they were simply good at planning ahead.

While parents often made decisions together, mothers did more of the anticipation, planning and research

This showed participants believed personality differences and work constraints were driving these inequalities. These were well-educated participants who agreed to take part, so they may not be fully representative, but it still gives an interesting insight into a misconception that other studies have debunked – women aren’t naturally better at planning, organising or multitasking, they are just expected to do it more and so eventually become better at it.

Yet there are other structural reasons why women continue to take on more of the mental load. Women often find a way to work flexibly, whereas men’s jobs are seen as more rigid, their careers more traditionally linear. This means women are more available for childcare, do more of it – and as a result have to think about it more. More powerfully, gendered expectations that start from birth can explain why ideas around who does the housework and childcare are so ingrained. Daughters are known to do more housework than sons, for instance.

Motherhood ideals also feed into this equation. For instance, the home is often seen as a woman’s domain. We know that women are judged on neatness more harshly than men. One study showed that if an identical room for a prospective rental property was said to belong to Jennifer rather than John, Jennifer was rated less likeable, less competent and less hardworking than John. The conclusion? The state of a woman’s home was literally linked to her worth. 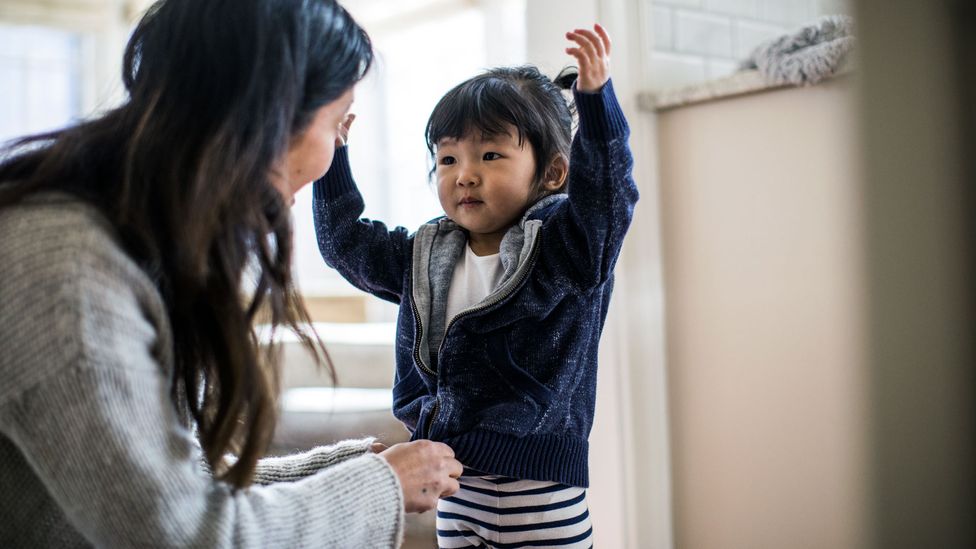 Mothers doing tasks like picking a child’s outfits are examples of “maternal gatekeeping” – subtle tasks that fall to mums to take the lead on (Credit: Getty Images)

These ideals can be self-perpetuating. Because women are judged more on how a household runs, it’s essential they display “maternal gatekeeping”. This means taking on childcare tasks that could be shared like writing meal plans or picking outfits, subtly signalling that it’s a mother’s job. Think of the old joke, “Well, her father dressed her”. It’s funny when dads do it badly, but implies bad mothering if mothers do things wrong. Despite progress we’ve made in normalising men doing childcare, there’s still “this sense that women are ultimately responsible for family outcomes”, notes Daminger. “There are more costs to a woman if these things don’t go well or don’t happen.”

Impacts, at home and at work

The fact that mothers end up assuming this mental load has consequences, however.

Mothers are more stressed, tired and less happy than fathers, who are happier during childcare, research shows, in part because they tend to do the fun, recreational activities more often. One Swedish study showed that when women thought the distribution of the more obvious housework was unfair and perceptions of each partner’s contribution differed, it led to marriage problems and increased the likelihood of a split. The risk is also exhaustion for the mothers, who might initially ask for help, which can come across as nagging if it has to be repeated again and again. “And then that wears on relationships,” says sociologist Daniel Carlson of the University of Utah, who found that unequal distribution of caring responsibilities in couples can also lead to less sex.

If women are over-stretched at home, moreover, that means many feel they cannot physically or mentally put in the extra hours demanded by many workplaces, so the gender pay gap continues to widen. Women make up the majority of part-time workers, for instance, and in turn are less likely to get pay rises or promotions after having children, making it even harder to pursue top jobs. Many leave the workforce altogether.

Since the pandemic hit, the link between gender equality at home and women’s workforce participation has been more in the spotlight than ever. While there are many systemic issues at play, tackling hidden household labour within couples could help ease the burden that falls on women and deters them from other activities. 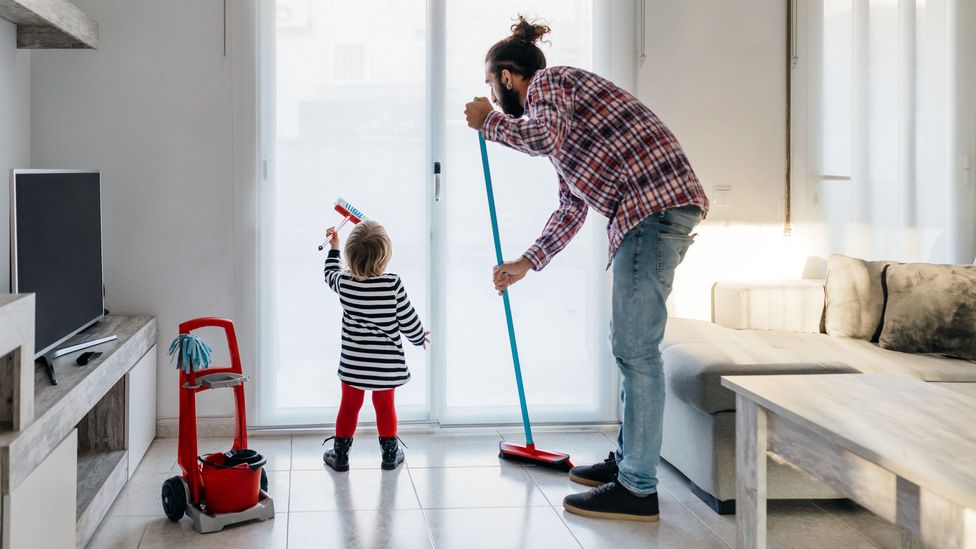 It’s clear that most men want to get more involved in their children’s lives, so to ease this on an individual level, couples could explicitly talk about who does what, end to end – it’s no good taking the kids out on a playdate if someone else has already planned and organised the activity. To foster new habits to help share the load, we have to make the invisible more visible. An awareness of it is a good first step, agrees Daminger, and constantly being clear about who is managing which task, including the planning.

If we explicitly state how much planning is involved in every aspect of childcare and housework, it will become clearer just how much hidden work we do. Fortunately not all couples have unequal divisions of care: same-sex couples, for instance, have a much more equal distribution compared to heterosexual couples, as they are not beholden to expected gender roles. This shows that the load can clearly be shared when it is more openly talked about.

If we explicitly state how much planning is involved in every aspect of childcare and housework, it will become clearer just how much hidden work we do

On a societal level we also therefore need to reframe some very deep-seated beliefs about what a man or a woman’s role is. Carlson, who led research showing that egalitarian views on task-sharing contribute to sexual frequency, says that we also need to consider the “structural factors that are inhibiting a lack of workplace flexibility”, like breadwinning norms for men and “an ideal worker culture that pushes men into the labour force and keeps them out of the home”. Policy could help too – research shows that men who take paternity leave do more childcare later.

But in the absence of policy, perhaps the best way for women to reduce the mental load is to do less. Initially there may be pain to achieve any form of long-term gain, says Carlson. If the mother stops thinking about what needs to be done and the father does not anticipate these needs, it may initially cause stress or judgement – but that could allow learning for next time. “It’s kind of classic operant conditioning. We’re not putting men through mazes or shocking them for food pellets… but it’s kind of like, ‘Oh, I didn’t remember to do this last time and there was a negative consequence’.”

Over time, doing less could increase our partner’s involvement and, in turn, free up more of our mental energy to focus on ourselves. At first, we might get judged for it, but it could lead to greater happiness later on. We all learn from doing, after all.

El Salvador Bitcoin city planned at base of Conchagua volcano

November 22, 2021
El Salvador plans to build a Bitcoin city at the base of a volcano, with the cryptocurrency used to fund the project, it... More

200 Years Of Greece, Our Greece! : By Kostas Varsamis

What Happens To A Long-Term Relationship When One Partner Transitions?

May 24, 2021
Author Emma Batchelor is the winner of The Australian‘s Vogel Literary award for Now That I See You, a novella bas... More

May 17, 2021
With a population estimated at just around 200, Europe’s smallest ethnic group is fighting to save its language an... More

May 11, 2021
In the past week, India has reported over 2.7 million cases of Covid-19 and nearly 25,700 deaths, al... More
Prev Post Australia Trade Deal: Ministers Discuss British Farmers' Concerns
Next Post Hockney And Van Gogh: How Images Of Nature Bring Us Joy