Apo Island in the Philippines once depended on tourism to help its efforts to save rare local turtles. So what happened when the pandemic brought tourism to a standstill?I

It may be at the apex of the Coral Triangle, but the Philippines isn’t exactly on top of mind when it comes to global marine resource protection efforts. While it boasts thousands of different species of fish, coral, and other forms of marine life, it is also the world’s third-worst plastic polluter after China and Indonesia. The environmental group Ocean Conservancy says the country is responsible for generating and adding as much as 2.7 million metric tonnes of plastic waste to the environment each year.

Yet it is here, in this environmentally beleaguered archipelago, that the endangered green turtle and its reptilian cousin, the hawksbill turtle, have managed to find a niche where they are given proper sanctuary. The area, located in central Philippines, is just 70 hectares (172 acres) in size, with a coral reef of just over 100 hectares (247 acres), a modest 15% of which is a marine reserve. Apo Island isn’t only remarkable because it has been able to sustain a small, steady population of green and hawksbill turtles – the reef is also home to as many as 385 different species of fish, and several species of dolphins.

Hilconida Calumpong, who served as a board member of the Apo Island Protected Landscape and Seascape Protected Area Management Board, says the turtles – mostly juveniles and subadults – are drawn to the verdant coral reefs now found in the area. “The green turtles feed mainly on algae and sponges while the hawksbills feed mainly on sponges and invertebrates,” she says. “Apo Island has large coral reefs which host many species of algae and invertebrates. [We also have] seagrass meadows and coral reefs, [which] line the coast of mainland Negros Islands, and also host populations of turtles, which come from the Indopacific, Indonesia and Malaysia.”

To help the hawksbill turtles further, Calumpong notes that a specific nesting area was set up some years back.

Apo Island and its modest, but thriving green turtle population, is a rare success story for a country whose reefs are no longer seen to be in “excellent” condition. Some 90% of the more than 16,800 square kilometres (10,000 sq miles) considered to be in fair condition at best, or poor at worst. At one point, the area was plagued with the same problems seen in most parts of the country – there were tourists (plenty of them) and fishermen were using the same destructive methods that had been in use since the 1960s. These included the use of dynamite, cyanide, and bottom trawling in an attempt to catch a dwindling number of fish. 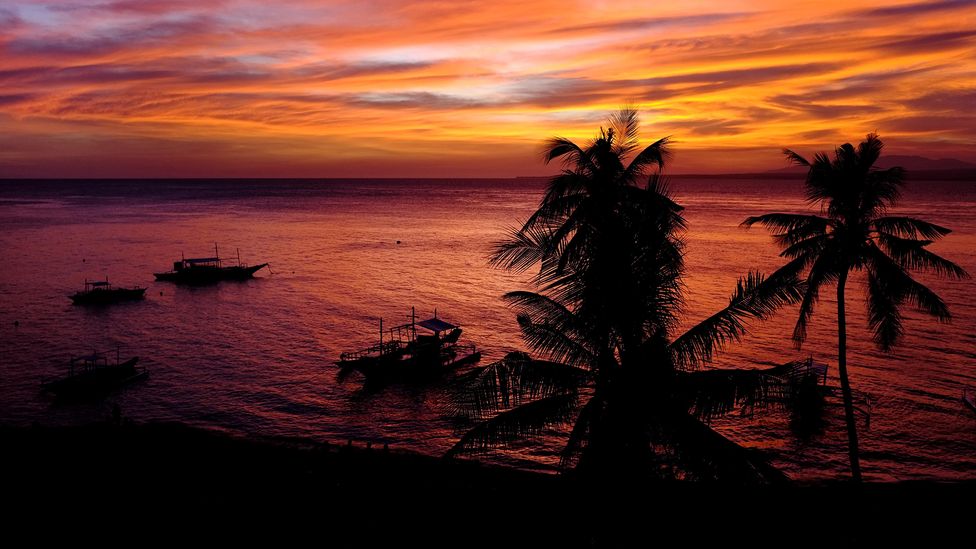 The pandemic has had a drastic effect on the island’s economy, which used to rely on tourism (Credit: Gonzales Photo/Alamy)

The success of Apo Island comes on the back of an earlier experiment which saw researchers, headed by marine biologist Angel Alcala from the central Philippine Silliman University, launch a conservation project on a nearby island.  This area was known as a haven for whale sharks. It was there that the university tested a pilot scheme that involved the establishment of marine sanctuaries in the Philippines. “At that time, it was just the concept of marine sanctuary, setting aside a portion of the waters, about one-third of the coastal waters, and designating that as a ‘no-take’ fishery, with the hopes that fishery stocks would go up and eventually spill out over the protected area,” says former Silliman University President Ben Malayang, who worked on the early stages of the project.

Alcala understands the project is not easily replicated, even in coastal marine areas where it is needed the most

While the nascent marine reserve was an economic success, a change in policy meant that control over the area reverted to the local government. It was then that Alcala and his team decided to set up a different marine reserve on Apo Island. 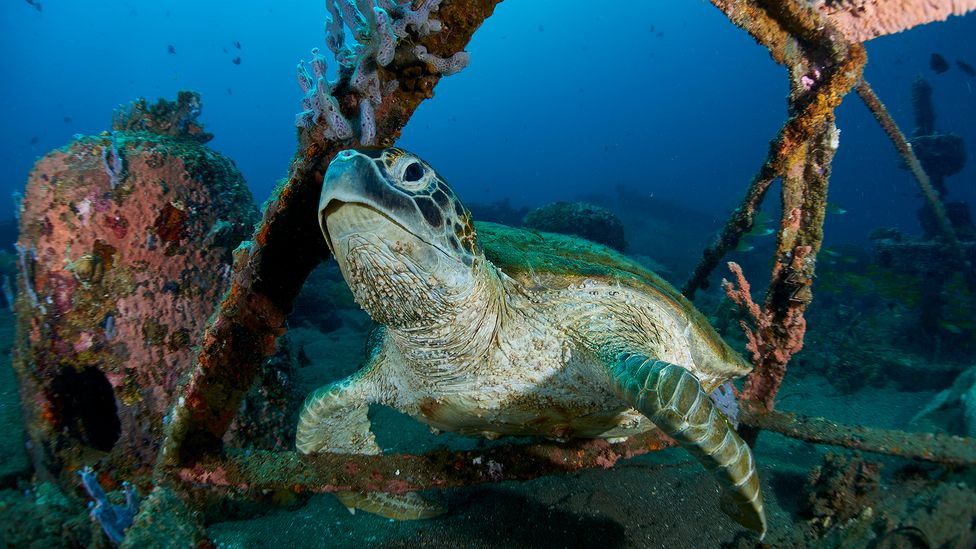 The turtles’ habitat has been harmed by decades of exploitative fishing practices and pollution (Credit: Alex Permiakov/Getty Images)

Alcala and his team enlisted the local fishing community, which had about 500-600 fishermen, so they could act as partners to protect and manage the area that would later become the Apo Island sanctuary. He says the biggest challenge in establishing the “no-take” area involved convincing the local community that it would be in their best interest to stop fishing in the most abundant part of the reef.

“I remember that in the early years of our work in Apo some fishermen and the barangay captain [local community leader] refused to accept the proposal to create a protected area on the most productive part of the reef,” says Alcala. “Their reason was that fishermen would not be able to fish at this site if it became the no-take Marine Protected Area. So they suggested that the sanctuary be set up at another site which was less productive. Our team had to agree to hasten the process of setting up the sanctuary.”

Even as he acknowledges that the project’s greatest successes resulted in the recovery of Apo’s green turtle population, as well as prosperity for the island’s residents, Alcala understands the project is not easily replicated, even in coastal marine areas where it is needed the most. “One main issue in replicating the Apo project is the empowerment of local communities so that people responsible for management will remain faithful to their commitment to conserve marine resources. This requires the process of community organising, which appears to be rarely practiced in the country. There is a need for social scientists to participate in all conservation projects in the country,” he says. 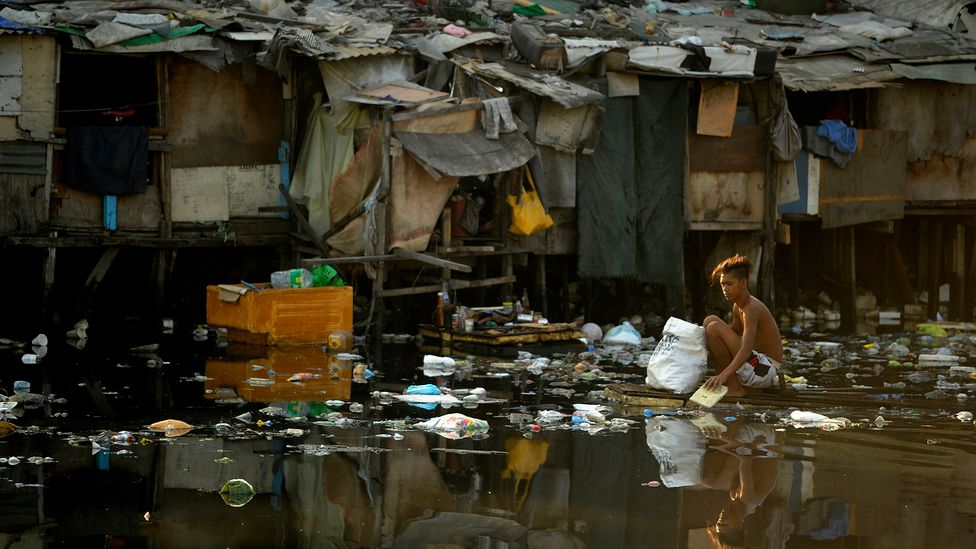 The Philippines is thought to be the third-largest source of plastic pollution in the world (Credit: Noel Celis/AFP/Getty Images)

Covid-19 has proven to be a mixed blessing for the endangered turtles struggling at Apo Island and in other protected reefs around the country. Krystal Dayne Villananda, the protected area superintendent of the much larger, and separate Apo Reef Natural Park 500km (310 miles), away and in the province of Occidental Mindoro, says the drastic fall in tourist numbers has led to greatly diminished incomes. This sharp fall has in turn hurt budgets for the conservation and protection of national parks.

But even as Villananda is concerned about the impact of climate change on the turtles’ habitat, “we noticed the increasing number of sea turtles crawling to the island, even in places intended for tourists before Covid”, she says. “The undisturbed ecosystem is one of the major factors for the increase in the number of crawls.” The number of crown-of-thorns starfish, which feed on coral, also dropped in the area she manages, adds Villananda.

Where the Apo Island Protected Seascape and Landscape area is concerned at least, fewer tourists might be less of an issue for marine biologists like Alcala, who is worried about what the tourism, water pollution, and typhoons triggered by climate change will eventually do to the delicate reef area. “There should be a new way of requiring visitors to register before coming to the island,” says Alcala. “There have also been reports of water pollution, which need immediate attention. The high frequency of occurrence of typhoons these days make it necessary for the Apo community to extend the no-take zone to the western part of the island, where typhoons could cause the least damage to the coral reef.”

But Malayang is slightly more optimistic, noting that there are certain physical factors that limit the presence of tourists on Apo Island, most notably a lack of fresh water supplies. He also believes that education has shown the island’s inhabitants that sustainable living practices must continue in order for the area’s economy and ecology to continue to thrive.

October 12, 2021
A deal to avert another carbon dioxide crisis in the food and drink industry has been extended until early 2022. US firm... More

October 8, 2021
Wuzhou, in southern China, is a living example of the country’s dependence on its “build, build, build”... More

September 23, 2021
Ferry operator Stena Line, working in conjunction with the Frederikshavn Municipality, and the Port of Frederikshavn, De... More

September 23, 2021
The Getting to Zero Coalition has released a new manifesto in advance of the COP26 conference, the global climate gather... More
Prev Post Oman’s Spectacular Norway Of Arabia
Next Post Titanic Documentary 'The Six' Spotlights The Chinese Survivors The World Forgot