Virginie Viard took Chanel’s Cruise 2021/22 collection to the South of France, where she staged a dreamy presentation complete with nods to Jean Cocteau and a live performance from the French singer Sébastian Tellier. British Vogue’s fashion critic Anders Christian Madsen brings you five things to know about the collection. 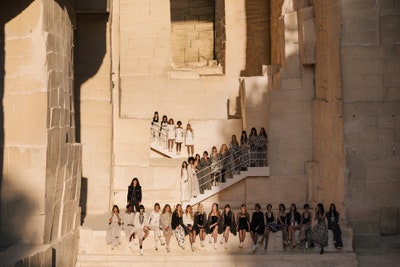 The show took place in Carrières de Lumières“An invitation to travel” was how Chanel described its Cruise 2021/22 show, set in the Carrières de Lumières in the village of Les Baux-de-Provence. A former quarry, the place is now home to epic lightshows that draw crowds when there’s not a pandemic around. In 1959, Jean Cocteau shot his film The Testament of Orpheus there, casting a stellar group of fellow artists from Pablo Picasso to Brigitte Bardot. Virginie Viard is a fan: “In particular this magnificent scene: a man with a black horse’s head descends into the Carrières de Lumières, his silhouette cut out against the very white walls,” she said. Cocteau, of course, was also friends with Gabrielle Chanel, or “my dear Coco” as he called her in his letters. Their two worlds united in Viard’s collection, underpinned by the house’s eagerness to return to the life of travel that created Cruise collections in the first place. 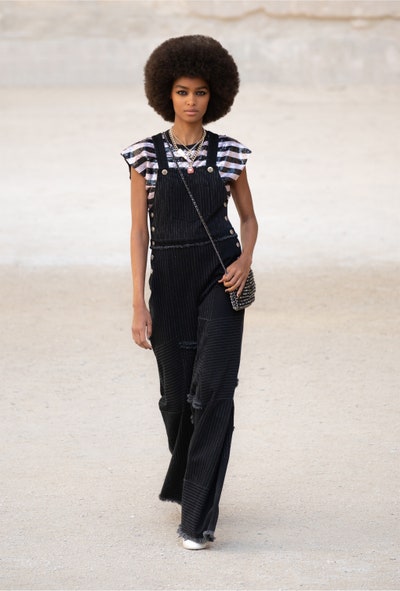 It was summertime modernismBackdropped by the golden white limestone of the Carrières de Lumières, Viard rolled out a modernist collection rooted in the familiarities of summertime travel. “The simplicity, the precision and the poetry of Cocteau’s film made me want to create a very clean collection, with a very distinct two-tone, made up of bright white and deep black,” she said. Graphic black and white dresses had a naval sensibility about them, which, when backed up by knitted macramé dresses and capes, were decidedly seaside-friendly. Add magnified peplos silhouettes and those pre-pandemic memories of the Mediterranean were hard to forget. It was perhaps Viard’s most comfort-driven collection since taking the reins at Chanel, a statement expressed in knitted tracksuits, mesh tops layered casually over t-shirts, and twill dungarees with frayed edging. 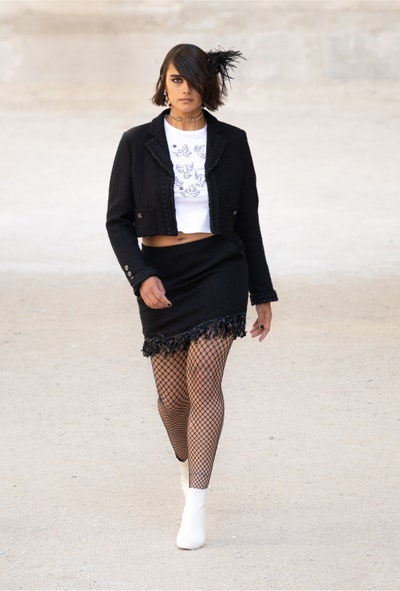 There were frills and fringes galoreAdding to the lightness of it all, Viard trimmed her garments and bags with frills and fringes that brought a continuous sense of movement to the collection. “Echoing the extreme modernity of Cocteau’s film, I wanted something quite rock,” she said. “Lots of fringes, in leather, beads and sequins, T-shirts bearing the face of the model Lola Nicon like a rock star, worn with tweed suits trimmed with wide braids, and pointed silver Mary-Janes. A look that recalls as much the modernity of the sixties as that of punk…” 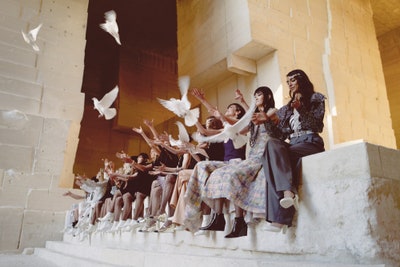 It got animalisticGabrielle Chanel shared with Jean Cocteau an affinity for bestiaries, observed in the various animal representations that embellished her apartment at 31 rue Cambon. Viard translated the fascination into various motifs in prints and “lucky charm” adornments, which easily captured the free-spiritedness of the collection. They included stars, a nod to an “absinthe star” Chanel mentioned in one of her letters to Cocteau. After the show, each model released a white dove before the French singer Sébastian Tellier performed a low-key medley that could have scored a summer night’s dinner in the South of France. 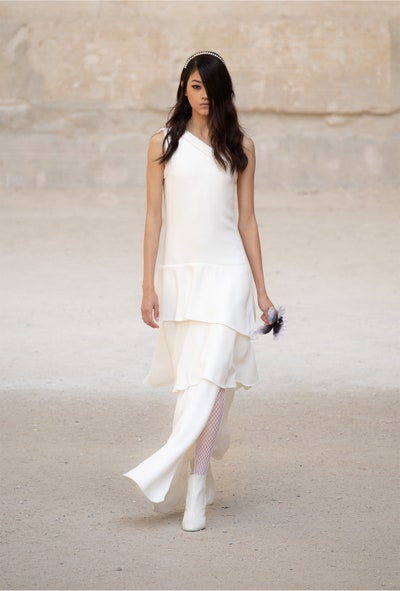 Chanel continued to evolve its digital formatSince the pandemic put a stop to live audiences and travel, Chanel has steadily been developing its digital experiences to make them more immersive for viewers and clients – while making no secret of the fact that it intends to return to the live format as soon as possible. This season came with a preview short film by Inez and Vinoodh shot at 31 rue Cambon, as well as moodboards depicting the friendship between the house’s founder and Jean Cocteau.

The world is nowhere near the end of the pandemic, says famed epidemiologist Larry Brilliant

August 9, 2021
The pandemic is not coming to an end soon — given that only a small proportion of the world population has been vaccinat... More

Together, We Can Restore Our Earth

July 13, 2021
The COVID-19 pandemic has unquestionably put health on our priority list and with holistic health becoming the need of t... More

World Food Safety Day 2021: Significance and theme for this year

Tartan: The Misunderstood Icon Of ‘Scottishness’

May 29, 2021
Tartan is updating its image in the 21st Century, with new patterns exploring issues around climate change, homelessness... More
Prev Post BIMCO: Scrubbers Contribute to Increase In HSFO Sales In 2021
Next Post Food Giants Respond To Worries Over Packaging